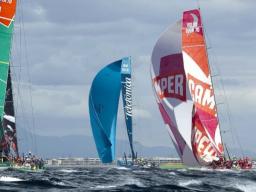 The popularity of the Volvo Ocean Race is often compared to the Olympic games and football world Cup: stream lead nine thousand of the companies whose stories about the previous race in total looked at more than half a billion people. Volvo Ocean Race — the longest sporting event in the world. The regatta will start on October 14 with the port race in Alicante (Spain), October 22 yachts will start the first stage and around the globe, will finish on 30 June 2018 in the Hague (Netherlands). The route will be the longest in the entire 44-year history of the regatta, its length will constitute more than 45 000 nautical miles (83 000 km). The participants will cross four oceans and will make stops in 12 cities on 5 continents. The trophy is not a reward, and a challenge silver Cup, Volvo Ocean Race, on which are engraved the names of all the winners of the regatta since 1973.